Presenting the information in the form of Graphs, Charts, Maps etc., we call it as Data Visualization.

Microsoft Power BI contains below Suite of Software’s to perform end to end BI Process. Let us look at each of them and their usage in Business Intelligence Process.

Power BI Desktop is a development software in Power BI Suite of software’s which is used to Connect to, Clean, Model and Visualize Your Data. Power BI Desktop contains Multiple components internally to perform above activities.

Power Query is used for Data Preparation in Power BI. The Power Query comes with a Graphical Tool called Query Editor and a formula language called M to transform the data. Power Query can load the result set into Power Pivot model.

Power Pivot is an In-memory component in Power BI to store the transformed data.  Power Pivot works on “xVelocity” In-Memory based tabular engine. The In-Memory engine gives Power Pivot super-fast response time. Modeling engine in Power Pivot would provide you a great place to build your Star Schema or Snow Flake Schema by establishing the relationships between Tables or Entities. To Create additional information for analysis in Power BI we use DAX (Data Analysis eXpression) Language. DAX is a powerful functional language which contains multiple functions that are helpful to create and Calculated Columns and Measures.

Power View is used for data Visualization in Power BI. With Power View you can create interactive charts, graphs, maps, and other visuals that bring your data to life. In Power BI you can Visualize the Data using hundreds of Visualization, in fact no other BI tool can have this many visualizations.

Power BI Service is an Azure Cloud Based Server from Microsoft used for Managing and Sharing the Reports.

Power BI Report Server is a solution or an On-Premise Server from Microsoft that customers deploy or install on their own On-Premises Servers for Managing and Sharing the Reports.

Power BI Mobile is a Mobile Application which is used to view the Reports and Dashboards in Mobiles. Power BI Mobile App is available for Android, Apple, and Windows Phone, simply download it from Google Play (Android), or App Store (Apple), or Windows Store (Windows Phone) and install.

Flow of work in Power BI 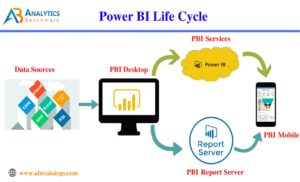